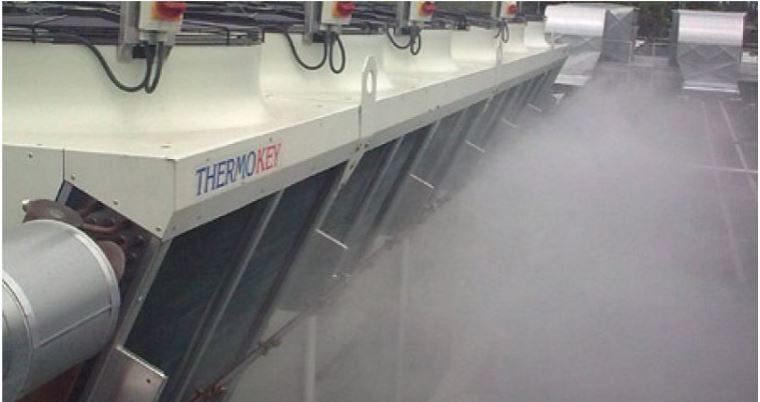 Determining how well spray nozzles perform is a factor that should not be overlooked when investigating cooling system performance issues. Nozzles play a crucial role in transferring the hot water from the process over the fill and are responsible for various phases in the tower’s performance.

A nozzle’s primary task is to transfer the hot water returning from the process to the heat transfer fill. The nozzles should be sized to account for the design flow rate of the cooling system and subsequent pressure drop through the nozzle of the cooling tower so that a uniform pattern gets delivered without gaps in-between the spray areas. Having invested in installing a new cooling tower, it’s important to know that the heat transfer surface is fully wetted out and that a constant level of water is being evenly distributed. Moreover, performance data relating to a fill is centred around this hypothesis.

When gaps in spray coverage exist, it leads to air bypass and poor water distribution. This is because dry fill provides less resistance to airflow. Air will always take the path that offers the least resistance. Thus airflow is ‘stolen’ from wet fill areas where hot water needs to be cooled making the cooling tower less efficient.

Furthermore, because water and air are both fluids, gaps are not constant in these areas. The fluids compete, interact with one another which means they tend to shift and pulse.

The result? Areas of the fill experience fluctuating dry and wet cycles. This promotes the formation of scale and a breeding ground for harmful bacteria, in particular, legionella. Heavily scaled fill will adversely affect thermal performance capability. In a worst-case scenario, it could completely block airflow from the fill. This could ultimately lead to structural damage in a cooling tower should the fill’s extra weight become excessive.

A cooling tower’s thermal performance can be affected by a spray system in other ways.

This includes when water exits a spray nozzle and before it enters the fill. The water immediately cools as it sprays out. The effect this has on a spray area varies from 5-15% of a tower’s cooling capacity.

The key to overcoming the issue is to maximise interactions between the coldest air and the hottest water. As such, nozzles that generate smaller droplets have a greater cooling effect than nozzles that generate bigger, fatter droplets. A good comparison is when you are sprayed with a fine mist on a hotter day rather than being hosed down with a high powered hose.

Evaporative cooling towers suppliers understand the importance of having the correct size spray nozzles for the system design.

When water droplets escape from cooling towers , this is known as drift loss. The role of drift eliminators is to minimise the escape of drift from cooling towers. Nozzles can play a role in the level of drift that’s emitted. Damaged nozzles can cause water to shoot directly into the fill pack or drift eliminators causing damage and increasing the chances of drift escape. Nozzles should be inspected for damage as part of a maintenance programme. Split and broken nozzles may well be a sign of too high water pressure on the nozzles. Operatives should ensure that the cooling tower is operating within the original design parameters with the correctly specified nozzles.

Every cooling tower expels water vapour into the environment which is normal and a sign the tower is working efficiently however drift loss from cooling towers must be monitored and addressed by way of a maintenance and inspection programme. Damaged drift eliminators and heat transfer fills should be replaced.

The evaporation of water from the tower typically consists of pure water vapour, thus having no harmful effects on the environment. However, drift on the other hand is undesirable. These small droplets can carry chemicals and minerals which negatively impacts the local environment and without an appropriate water treatment programme, can be harmful to humans if inhaled as an aerosol.

Cooling tower drift eliminators are specifically designed to prevent droplets from entering the environment by capturing them within a cooling tower’s air stream. Thus water droplets, do not escape into the surrounding environment and are instead returned to the cooling tower basin.

An efficient drift eliminator in a cooling tower can ensure drift losses are kept to less than 0.001% of the re-circulating water flow rate.

Why does water evaporate in cooling towers?

Cooling towers use the principles of evaporative cooling to reject heat. As such, a proportion of the cooling water is evaporated, referred to as evaporation loss, leaving the remaining water cooled. Heat cannot be created or stored within a cooling tower therefore a cooling tower will reject all of the heat that is put into it. The resulting cold water temperature will be affected by changes in the heat load put in to the cooling tower.

What are Cooling Tower Nozzles?

Spray nozzles are used to deliver water in wet cooling towers with a spray distribution system. The nozzles distribute water evenly and constantly with the primary task being to evenly distribute water returning from the process over the fill pack.

How do nozzles work within a Cooling Tower System?

Nozzles use kinetic energy given off by water and break it up into smaller droplets. As the pressure increases, water flow through nozzles also increases thus, the size of the droplets decrease. The size of the spray nozzles and where they are located plays a key

role in the performance and a tower’s cooling efficiency.

What are spray nozzles used for on a Cooling Tower?

Spray nozzles are used to deliver cooling water evenly to fills. These nozzles have various sizes and shapes depending on the design conditions of the cooling tower and wider cooling system parameters.

Richard is the CEO of Vistech Cooling. With over a decade of experience, Richard knows a thing or two about Cooling Towers. He’s constantly innovating and looking for new ways to not only reshape the industry, but create the most efficient and streamlined process for his clients.