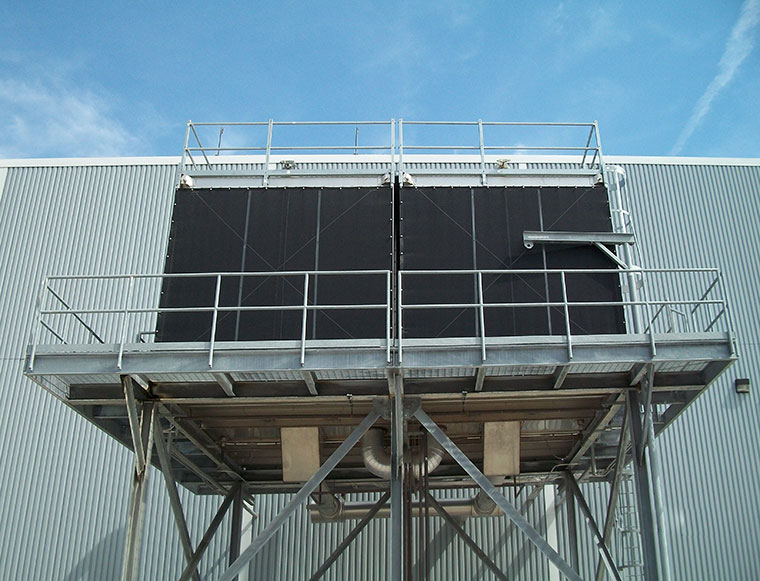 Unfortunately, outbreaks of Legionnaires’ Disease are all too commonplace and on occasion, a cooling tower is responsible for an outbreak. Understanding why cooling towers provide the perfect environment for Legionella cooling tower bacteria to thrive to harmful levels is all-important when it comes to preventing it from happening.

What is a Cooling Tower?

A cooling tower’s role is to remove heat from the water. The waste heat that buildings or production processes produce gets extracted using a local cooling system. Once the heat is cooled by a tower, it is transported and then ejected into the environment. Cooling tower bacteria can be emitted if correct maintenance and water treatments are not routinely carried out.

The actual cooling process is done by mixing heated water and air which lowers the temperature of the water. A good description of the process is to think of a large fan located inside a tower that works overtime to cool heated water causing it to evaporate in the process.

Businesses that Use Cooling Towers

Cooling towers can be found in many locations and are used by many businesses which include:

Studies estimate that bacteria can be found in at least 60% of cooling towers with some estimates being even higher.

The Perfect Environment for Legionella Bacteria to Thrive

Legionnaires’ disease is caused by an organism called Legionella bacteria which can cause a potentially fatal lung health issue. Water that is the perfect temperature (between 20 and 45 degrees Celsius) is all that the bacteria require to thrive. Any temperature below or above this will not see the bacteria grow and multiply.

Cooling towers operate at different temperatures and as such, there is a risk of the Legionella bacteria forming if nothing is done to prevent it from taking hold. Water is  emitted into the air by cooling  towers in the form of either evaporated water vapour or unfavourable water droplets (drift). The latter may potentially lead to a scenario where tiny droplets of water are contaminated. The wind can carry the cooling tower bacteria far and wide.

How Legionnaires’ Disease is Contracted

As such legionnaires disease cooling tower issues must never be overlooked.

The importance of testing, cleaning and maintaining cooling towers regularly cannot be stressed enough. More especially as by not doing so, the danger posed to people over a wide area is that much greater. The cooling tower cleaning procedure must be carried out regularly and thoroughly. Within the UK, all cooling towers are notifiable under the Notification of Cooling Towers and Evaporative Condensers Regulations 1992 https://www.legislation.gov.uk/uksi/1992/2225/contents/made and should be managed in accordance with HSG274 Part 1 https://www.hse.gov.uk/pubns/priced/hsg274part1.pdf

When cooling tower maintenance and water treatment is routinely carried out, bacteria levels can be kept below dangerous levels. Good practices are key to reducing the risk of a Legionnaire’s disease outbreak occurring. Additionally, defective, damaged and old tower parts should be replaced when needed to prevent biofilm forming.

Specialist companies undertake to test, maintain, and clean cooling towers regularly which is one of the best preventative measures to take. This ensures that health and safety obligations are met at all times and reduces the risk of stale water in cooling towers being a concern.

The Disneyland park incident is one of the most important outbreaks of Legionnaires’ disease that happened in recent times. Following an outbreak, authorities found that Legionella bacteria had flourished in two cooling towers. The people affected by the disease had all spent time close to the park, or they had visited Disneyland.

The people affected were aged fifty-two and older. One person who was suffering from an underlying health issue died. Both of the cooling towers in the Disneyland theme park were closed down as a result of the outbreak. However, it is worth noting the public did not have access to the cooling towers and that they were infected by the contaminated water droplets the towers emitted.

Other incidents where cooling towers were responsible for outbreaks of Legionnaires’ disease include:

The reason why cooling towers could be responsible for outbreaks is because there is a potential for contaminated water vapour to be spread over such large areas. People inhale the contaminated droplets and thus become infected without ever having come into contact with a cooling tower.

What diseases do you get from cooling towers?

You can contract Legionnaires’ disease which is a type of pneumonia from contaminated water vapour released from a cooling tower which you inhale whether you are close to the tower or further away.

Chemicals used in the water treatments of cooling towers include chromium which helps protect pipework and equipment from corrosion and to control the growth of algae. There are set standards to limit the level of chromium compounds released into the environment.

How do cooling towers cause Legionella?

If not well maintained regularly, the droplets released into the environment contain the Legionella bacteria.

How do you prevent Legionella in a cooling tower?

You can reduce the risk of Legionella bacteria growth in a cooling tower by carrying out regular cooling tower cleaning procedures.

Legionella disease can be potentially fatal because your lungs are negatively impacted.

Lucy keeps the well oiled machine of Vistech Cooling running smoothly. She has close to a decade of experience working in the industry and creates industry-leading content that provides necessary information but also deeper insights into the field most people may not have considered.