CONSIDERATIONS WHEN SELECTING AN ADIABATIC COOLER 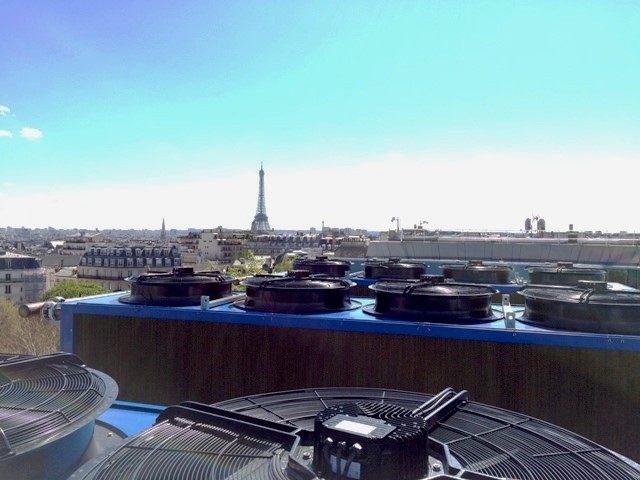 UNDERSTANDING THE DIFFERENT TYPES, COSTS, LEGISLATION AND OTHER IMPORTANT FACTORS IN DECIDING THE BEST FIT FOR YOUR BUSINESS

There’s an ongoing trend within the industrial and commercial cooling sector in the UK to replace ageing wet cooling towers with adiabatic /hybrid coolers. Purchasers are attracted by the reduced water treatment costs and legislative requirements whilst business owners and environmental stakeholders seek to reduce water consumption.

Changing from cooling towers to adiabatic coolers does however need careful consideration as there are a number of factors at play that will ultimately decide firstly whether adiabatic cooling is the right approach and if so, what type of system you should implement.

This article will also be helpful for those looking to replace existing adiabatic coolers or upgrading from dry air coolers.

Evaporative cooling is a natural process whereby when heat is applied to water it changes from a liquid to a vapour and when evaporation occurs, the heat is taken from the water that remains in liquid state resulting in cooler water.

In an open-circuit cooling tower, the water to be cooled is distributed over a fill pack at the same time as a fan system moves air through the fill pack. This causes a small portion of the cooling water to evaporate which reduces the temperature of the remaining circulating water. The cooled water is collected at the base of the cooling tower and then recirculated to the plant or process needing to be cooled and the warm, humid air is discharged from the tower into the atmosphere

Adiabatic Cooling occurs when the pressure on an adiabatically isolated system is decreased, allowing it to expand , thus causing it to do work on its surroundings. When the pressure applied on a parcel of air is reduced, the air in the parcel is allowed to expand; as the volume increases, the temperature falls as its internal energy decreases.

An adiabatic cooler applies this principle to the air that is drawn across the coil by the fan. As the warm air comes into contact with the wetted pad or water spray, the air temperature is reduced adiabatically thus allowing sensible cooling of the coil below the ambient dry bulb temperature.

The majority of the water used to cool the air is evaporated to the atmosphere therefore is not recirculated however it is important to understand the water source as a stored or recirculated water source can pose significant legionella risk and can affect the legislative requirements.

With intelligent control it is possible to balance the use of the fans and water delivery to achieve either reductions in water consumption or energy.

Where the range (Delta-T) is significantly large, it is possible to arrange the coolers in series, whereby the first cooler would take the fluid temperature down to a pre-determined set-point and the next unit would reduce it further to the desired cold water temperature. Theoretically a single cooler could handle a larger range however in practice, coolers are manufactured to finite parameters.

Explanation of Types of Adiabatic Coolers

There is a multitude of designs of adiabatic coolers ranging from crude retro fitting of a spray system to an existing dry air cooler through to an intelligently controlled wetted pad or originally installed spray system.

Whatever the system in place, they can broadly be grouped into three distinct design categories:

The selection of the design type can be important as they pose different levels of risk and therefore different legislative requirements resulting in varying levels of ongoing management and maintenance costs.

The primary risk when assessing an adiabatic cooler is the risk from legionella bacteria and all design types require a risk assessment to identify and assess this risk.

Coolers that spray water will create an aerosol whereas trickle type wetted pad systems will not. Where aerosols are not generated, the possibility of disseminating legionella bacteria is low.

Although the water that is being used for the adiabatic process won’t be recirculated in most instances, as is typically the case in a cooling tower system, there is still the risk from impurities that promote microbiological growth in the water.

It is important to understand the source of the water, be it mains, mains via a storage tank of from another process within the site. Even mains water can have levels of impurities which will be contained within an aerosol therefore posing a risk.

Due to their design, adiabatic coolers only operate in wet mode during hotter periods therefore there are potential prolonged periods when the supply pipework will have stagnated. This poses a potential risk when it comes into operation after a period of stagnation.

Dead-legs and bypasses in the system also pose a potential legionella risk.

Contamination in an adiabatic system is typically from either the air or water. The air being drawn into the cooler may contain impurities such as pollen, insects, dust etc. and water will most likely contain dissolved salts that will be precipitated on the fins once the water evaporates. These both provide a potential legionella risk.

Current legislation states that only adiabatic coolers that spray water directly onto the heat exchanger require registration under the Notification of Cooling Towers and Evaporative Condensers (NCTEC). This is predominantly based on these types of coolers creating aerosols however the aerosol risk is still present on coolers that spray away from the coil and should be risk assessed appropriately.

All users of any type of adiabatic cooler should have a current risk assessment in place and a written scheme to control the risk where is there is a foreseeable risk of exposure to legionella bacteria. This should be available to an HSE inspector or Environmental Health Officer.

With environmental considerations rising up the priority list for may companies, it is worth looking at the impact on water and power an adiabatic cooler will have and choose a design that it best suited to your operational and environmental requirements.

If you are considering an adiabatic to replace a cooling tower then it’s important to understand whether there is enough space to install it in the same physical location. Being a less efficient means of cooling, an equivalent adiabatic solution will take up approximately 1.5 times the footprint of the cooling tower. It may therefore not be possible to use the same site or footings and civil works may be required to accommodate the adiabatic cooler.

Adequate space around the cooler is equally important to allow for air to be drawn in and over the heat transfer surface. In locations where this could pose a potential issue then potential solutions could include raising the cooler by way of a platform to let air be drawn up from underneath or using a single sided cooler when up against a wall.

Noise levels may also be a consideration if there are stringent levels to not exceed. An adiabatic will typically have a higher sound power level than that of a cooling tower delivering the same duty however there are options to reduce the noise levels. This could either be through attenuation or through control of the fans. For example, you could go for a larger adiabatic with more fans but run them at a lower rpm to achieve the duty and noise level requirements.

As we’ve discussed earlier, there are three main types of adiabatic cooler:

Each of these designs will have an impact on the life expectancy of the unit and should be a consideration when considering the Total Cost of Ownership (TCO) of the unit.

Coolers that spray water directly onto the coil will have a shorter life expectancy than those that spray away as the coil is likely to become scaled and corrode over a far shorter period. Not only is a scaled coil a potential legionella risk but it will also significantly reduce the performance of the unit thus consuming more power as the fans are used more often to achieve the desired water temperatures.

Although coolers that spray away are less prone to the scaling and fouling, it is definitely a factor as not all of the water is absorbed prior to the air being drawn through the coil.

Wetted pad adiabatic coolers offer the best solution in terms of life expectancy as the water is trickled through the pad, therefore no aerosol creation therefore no water comes into contact with the coil. The pad also acts as an air filter so no airborne material deposits on the coil either. This will significantly increase the life of the unit.

The wetted pads are consumables that will need to be removed, cleaned and in time changed however this is a fraction of the cost of replacing the coil / cooler.

Installing air intake screens to all types of adiabatic cooler is advisable to protect the coil and pads from airborne fouling.

Materials of construction can vary across different types of adiabatic cooler. Casings are often powder coated steel however there are options for GRP and stainless units. Coils are generally galvanised steel however can also be coated for added protection to increase the life of the unit. Coatings can add significant costs to the upfront costs of the unit so it’s important to understand the type of coating and any guarantees that are offered with it.

Maintenance should be completed at regular intervals, checking the motors, spray system and coil. Any air intake screens fitted should be washed or brushed down to not adversely affect the cooler performance.

As has been discussed, there’s a number of factors that should be reviewed when considering cooling using an adiabatic solution. Although legionella risks are potentially reduced versus using a cooling tower, they are still present depending on the type of adiabatic that is chosen and indeed some types still require registering.

Water consumption can be greatly reduced compared to using a cooling tower however power is likely to increase dependent on the controls employed in the system.

Physical space is a factor that should be considered to ensure that the units can be installed without major modifications to the current system.

The life time cost of a unit can vary greatly dependent on the type of adiabatic that is selected. Those that spray water directly onto the heat transfer surface will have a significantly shorter life than the wetted pad type systems where the water does not come into direct contact with the coil.

For further information or to discuss your specific requirements please contact me richard@vistechcooling.co.uk or (+44)1403 892622

Richard is the CEO of Vistech Cooling. With over a decade of experience, Richard knows a thing or two about Cooling Towers. He’s constantly innovating and looking for new ways to not only reshape the industry, but create the most efficient and streamlined process for his clients.